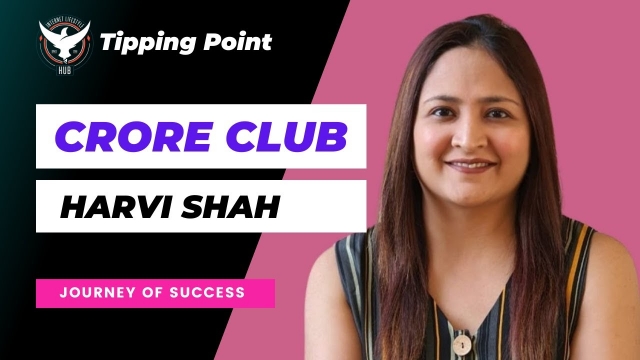 Mumbai-based fashion business coach Harvi Shah was eight months pregnant when she started her fashion jewellery brand BlingBag. However, it was not before hearing India’s leading digital coach Siddharth Rajsekar speak about achieving freedom in business that she became interested in coaching. From then to now, Harvi has trained 110+ students and built a community of fashionpreneur warriors by enabling women to launch their fashion stores online.

Despite coming from an IT background, she went big into sales and achieved Rs 6,50,000 in just two months after starting her own venture online and taking the plunge into coaching and mentorship. She joined the Internet Lifestyle Hub in February 2020.

“I was fascinated with Siddharth’s words – ‘Anyone can coach’. The idea of helping women was also clear in my head. However, the course I initially created around generic entrepreneurship had zero sales and I gave up. Within a couple of months after that, my husband lost his Rs 3 lakh/month salaried job during the pandemic. I wanted to fill in that money gap. I went back to coaching, and began to figure out my niche,” says Harvi Shah.

While finding her niche, it soon dawned upon her that Siddharth Rajsekar‘s initial suggestion to her about coaching for lifestyle products, was indeed something she connected with. “In the beginning, I wanted to help women start off any business. However, I could connect more to fashion e-commerce businesses around apparel, jewellery, and home decor. That’s how I narrowed down into my niche and cracked the code,” explains the young coach.

Harvi Shah, who was a diamond member in Siddharth Rajsekar’s Internet Lifestyle Hub community, was told to pump Rs 1 lakh a month into advertisements and to create a Level 2 course.

“I was told to push these two buttons. Despite being sceptical, I did. By August 2021, I was making Rs 6 lakh. In the next phase, I had to scale up my ad spends and launch the Level 3 course, while Level 2 had limited takers. I trusted the process. I realised that in order to scale, you have to spend the money which you have not earned yet. In November 2021, I made about Rs 18 lakh in a single night,” she said. She, however, continued to face challenges like low conversion rates and her Level 1 pipeline drying up as her students progressed to Level 3.

When Covid-19 got to her in January 2022, she took a break. Taking a step back during this tipping point, she told herself to accept the conversion rate and numbers she was getting as her own benchmark and reference points for her knowledge business.

“Harvi picked a niche congruent with her own background and went narrow into her field. Going micro helps a business owner’s cause, and that’s what she did. Harvi is a Quantum Club member in Internet Lifestyle Hub, who ran a traditional fashion business and never thought that she would get into the training and coaching industry. After implementing the steps in the Freedom Business Model, she now helps thousands of women become fashion business owners and is able to clock in amazing revenue figures by helping women launch their own fashion stores online,” says Siddarth Rajsekar, digital coach and host of the Freedom Business Podcast.

Watch Harvi Shah explain her process of her growth on YouTube: https://www.youtube.com/watch?v=rSFiG4l_7JY. This inspiring video has close to 50,000 views.

Disclaimer: The views, suggestions, and opinions expressed here are the sole responsibility of the experts. No Daily Digital Health journalist was involved in the writing and production of this article.